Amsterdam Airport Schiphol Airport transfers or economic taxi. Using our own fleet and working with reliable partners throughout Europe, we offer our clients high quality services at the most favourable rates, that are mainly 20-30% cheaper than a taxi

Transfer from Amsterdam Airport Schiphol to other destinations

How to get from Amsterdam Airport Schiphol to airport

When visiting Amsterdam Airport Schiphol, you can book a per-hour car rental with driver from 2 hours/day and more. Meet and Greet service, offered by our company, will significantly simplify the meeting in the airport for the newcomers. Using a "car rental with driver" service you can vesit the places of interest, famous shops or outlets to do some shopping near the city, saving your time in this way. Amsterdam Airport Schiphol chauffeur service offered by our company will cost you much cheaper to order a car rental with driver with us than to hire a taxi driver. To book the economy car or minivan with chauffeur or a comfortable premium class car, coach, shuttle bus up to 50 seats, please choose the button. Per hour rental in the left upper corner of the page, write in the [Departure:] field the departure point and number of hours. 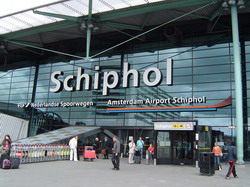 Amsterdam Airport Schiphol AMS is the main airport of the Netherlands, which is only 17,5 km away from Amsterdam, means that it takes only 20-25 minutes to get to the city. Schiphol is being called the most important air gateway to Europe: it is on a par with Heathrow, Frankfurt Airport, Charles de Gaulle airport. The airport serves tens of millions of passengers per year. As noted above, the airport has a very convenient location, so you can get from the airport to the city not only by public transport (that is cheaper than a taxi, but requires longer time), taxi (fast but expensive), but also you can use a thetransfer service from the airport to Amsterdam provided by our company, counting on getting the high speed, maximum comfort on you way and affordable prices. If you need a high-quality and reliable transfer, please don`t hesitate to contact us!

Book a personal driver from hotel near Amsterdam Airport Schiphol